CIMB Investment Bank Berhad (CIMB) takes pole position in RAM’s Lead Managers’ League Tables for 2019, leading its peers in both the value and number of deals rated by RAM last year. CIMB arranged RM18.9 bil or 32% of the RM58.6 bil of RAM-rated corporate bonds in 2019. Maybank Investment Bank Berhad (Maybank) comes a close second, having arranged RM18.6 bil or 31% of the same.

Having jointly lead managed several RAM-rated transactions, CIMB and Maybank rank among the top two in sukuk deals, both in terms of number of deals and programme size.

The RAM League Awards (RLA) ceremony is held annually, in recognition of the most influential and outstanding financial institutions (FIs) and organisations that are thought leaders, innovators and visionaries in the Malaysian bond and sukuk markets. The RLA fetes exceptional transactions and organisations that pioneer new structures and landmark deals. Telekosang Hydro One Sdn Bhd’s green sukuk stood out in 2019 and has been awarded the Blueprint award. Telekosang’s green sukuk represents the world’s first mini-hydro project that is aligned with the requirements of Securities Commission Malaysia’s Sustainable and Responsible Investments Sukuk Framework, the ASEAN Green Bond Standards, and the Green Bond Principles.

RAM congratulates all winners and hopes that the RLA will remain the industry yardstick for FIs and issuers alike in advancing the Malaysian debt capital market. 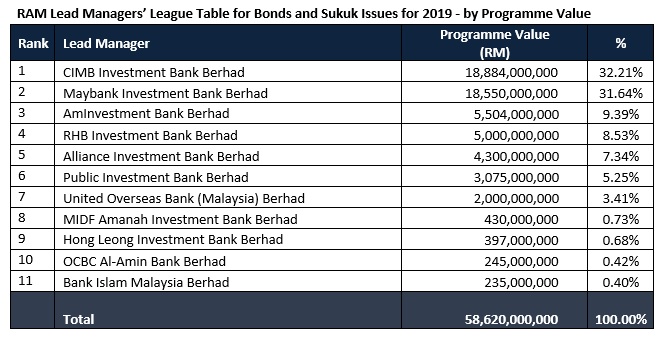 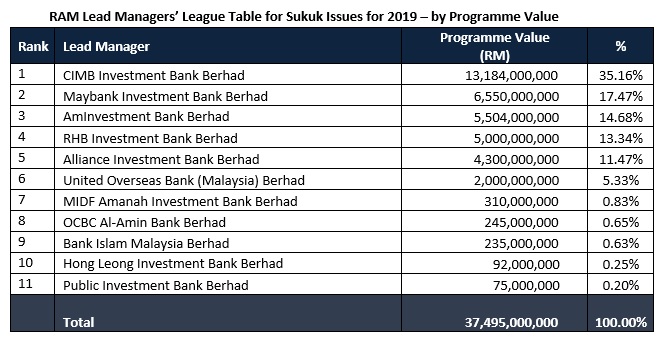 The RAM League Tables list lead managers by the value and number of deals for all RAM-rated bonds. Credit is given to the entire debt programme regardless of the type of instrument, as long as the debt had been issued during the period, either in full or in part. Please refer to our website for further details on the criteria for the RAM League Tables.