In a written reply to a question to Parliament earlier this month, the Works Ministry stated that the freeze on toll rate increases will be maintained for 2022. This is concurrent with its decision to restructure toll rates, to be negotiated with highway concessionaires. The government had postponed rate hikes for 29 highways last year, at a cost of RM2.25 bil in compensation.

As a sector, highways face high regulatory and policy risk owing to increased public scrutiny of tariff hikes, political contention over government compensation, and an overall aversion to raising rates for fear of burdening the public. In our view, the government’s move to initiate bilateral negotiations and conclude by end-2023, signals positive progress in resolving long-standing issues relating to toll rate increases and compensation, which are key rating drivers in RAM’s approach to rating project-financed toll roads.

We highlight the importance of negotiations taking the right path. Any rollback of the existing terms in current concession agreements could lead to severe credit repercussions and a loss of investor confidence. This could also harm the government’s reputation as investors, both foreign and domestic, watch its actions closely as a precedent for future developments.

A clear policy direction for the sector will provide certainty and support investor confidence, especially given the crucial role of private sector infrastructure funding. We expect bond and sukuk market activity to pick up and interest in the sector to be reignited when more definitive agreements are reached with the government. As at end-December 2021, a total of RM55.6 bil of expressway bonds and sukuk remained outstanding, involving 20 concessionaires.

“Although the subject of a highway sector restructuring has often been raised, we have observed more significant discussions and proposals of late. We believe restructuring will lift the outlook for the sector and benefit all stakeholders,” says Davinder Kaur Gill, co-head of RAM’s infrastructure and utilities ratings. “This would be in line with proposals outlined in the 12th Malaysia Plan to restructure the highway development model to emphasise reasonable toll rates for the rakyat and fair investor returns. Importantly, it gives added assurance that the outcome of mutual negotiations will ensure the viability of existing highway projects.”

Awang Za’aba Awang Mahmud, RAM Ratings’ Chief Executive Officer, adds that the bond and sukuk markets have long played a significant role in providing long-term funding for Malaysia’s infrastructure, making up slightly more than a quarter of all corporate bonds and sukuk raised. “With the government looking to maintain fiscal discipline, the domestic bond market will continue to be a key pillar in the capital markets, facilitating private sector funding for planned and future infrastructure projects,” he said. 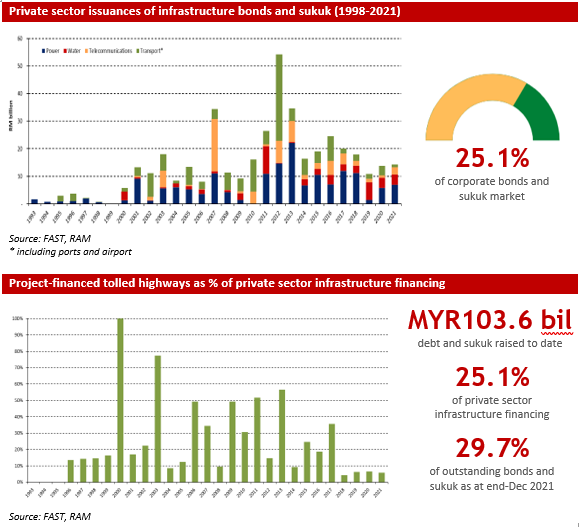 The performance of many highway projects has not been spared the effects of movement curbs in the wake of the Covid-19 crisis. That said, RAM’s portfolio of highways showed mixed performances. As businesses gradually re-opened and the economy showed signs of recovery in the last quarter of 2021, more mature and urban highways displayed greater resilience, with traffic patterns quickly rebounding after mobility restrictions were lifted. Expectedly, projects under construction faced increased liquidity stress as construction progress and scheduled tolling dates were pushed back.

RAM’s recently enhanced criteria for rating project-financed highways – Tolled Road Rating Methodology – which was released on 10 March, aims to provide further granularity and transparency in RAM’s traffic demand risk assessment, giving credence to the development of Malaysia’s road infrastructure sector, our observations of the toll road sector’s performance through economic cycles and, in particular, over the last 24 months as the country went through phases of lockdowns. This update allows us to conduct assessments in a more objective and consistent manner across all rated road infrastructure projects.

In the highway sector, RAM presently maintains rating coverage on the sukuk instruments issued by these entities: 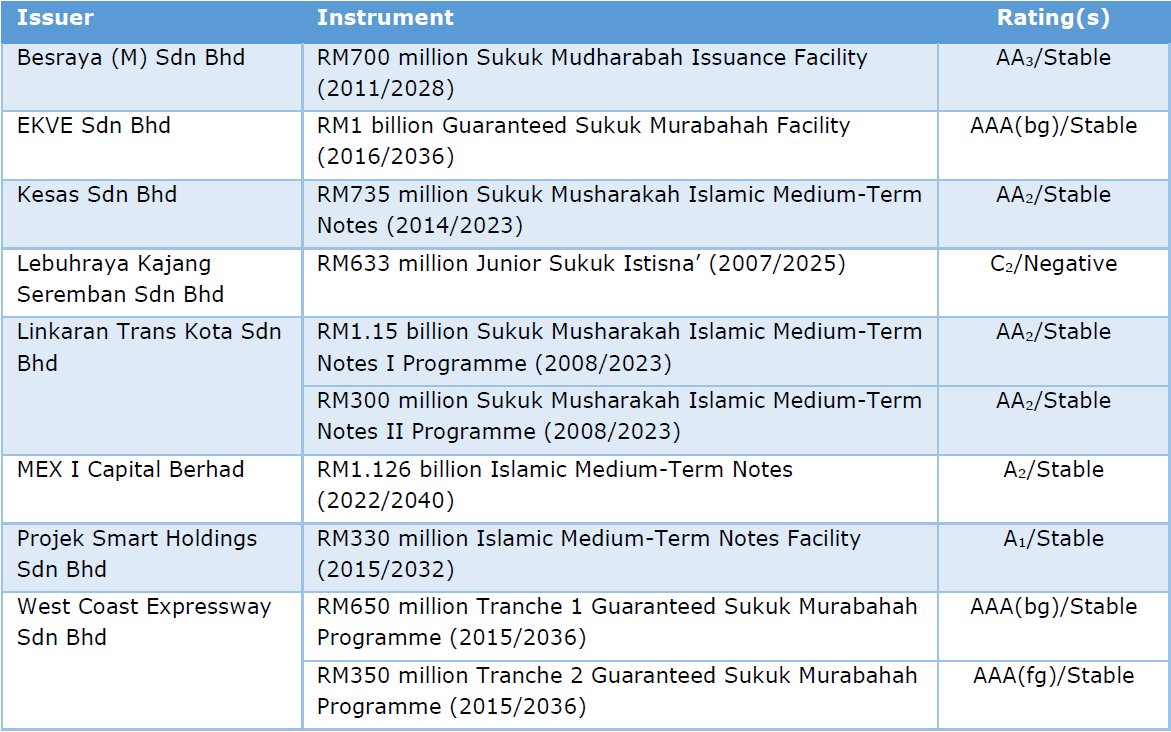