Operating out of the world’s largest sukuk market, RAM Rating Services Berhad (RAM) is a leading credit rating agency in ASEAN. Backed by a track record of more than 30 years, our credit opinions are widely used as a reference point by a broad spectrum of investors, financial institutions and regulators. Our thought leadership has earned us multiple awards and we continue to strengthen our franchise value globally. RAM’s journey in the ratings of sukuk commenced in 1994 with Petronas Dagangan Berhad’s RM300 million sukuk issuance. Almost three decades later, our portfolio of rated sukuk issuance stood at over USD205 billion covering more than 620 issuances as at end-June 2020. RAM continues to lead rating activities in the market with an extensive reputation in the ratings of “first” sukuk structures.
RAM Ratings’ market share of Malaysia’s rated quasi-government and corporate sukuk issuance as at end-2015

The emergence of Islamic finance in Malaysia dates back to the establishment of the country’s pilgrim funds in the 1960s. Various initiatives had subsequently ensued, such as the enactment of the Islamic Banking Act 1983 and the Takaful Act 1984. This had paved the way for the creation of Malaysia’s first Islamic bank - Bank Islam Malaysia Berhad - in July 1983, and the first takaful company - Syarikat Takaful Malaysia Berhad - in November 1984. Looking back, the stimulus for Islamic finance in Malaysia and the attainment of global recognition had been predicated by the prominence of sukuk issuance by the private sector, following the efforts of the Government of Malaysia to consolidate public-sector activities and promote the private sector as an engine of growth.

Since the mid-1980s, the private sector has been playing an instrumental role in the strategic development of the Malaysian economy. Spurred by strong economic expansion and the concerted support and efforts of regulators as well as market participants, the corporate bond market had charted an upward growth trajectory. The catalyst for this remarkable expansion was the Asian financial crisis in 1997, which highlighted the mismatches in funding maturities and the need for diversification from bank funding.
The intermediation by the bond market had allowed the matching of long-term, capital-intensive spending with the long-term liquidity provided by institutions, pension funds and insurance companies, among others. As a result, the value of Malaysia’s outstanding bonds grew exponentially, from approximately RM48.8 billion (USD12.2 billion) as at end-1987 to RM1.6 trillion (USD362.7 billion ) as at end-June 2020. Notably, sukuk accounted more than 60% of the outstanding sum.

The strong appeal of sukuk lies in its value proposition. For investors, sukuk offers portfolio-diversification opportunities and investment options in the form of fixed-income asset classes; issuers benefit from tapping the growing demand amid an increasing number of investors for Shariah-compliant investments. 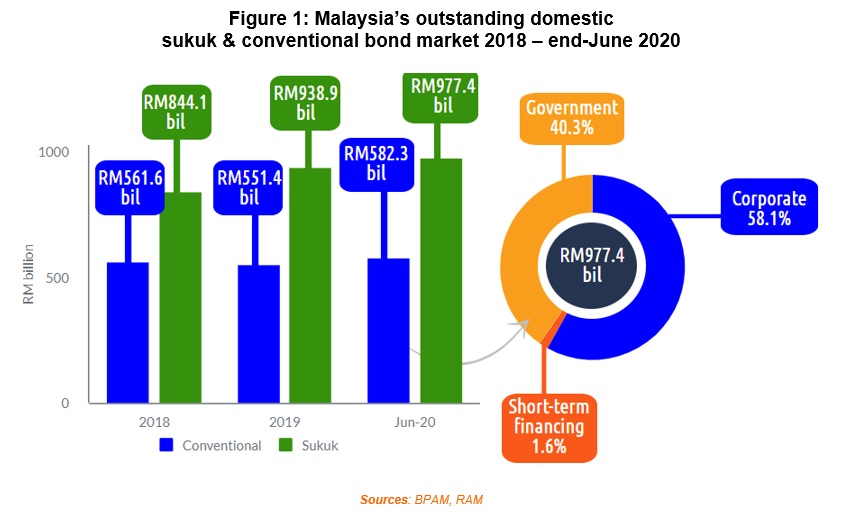 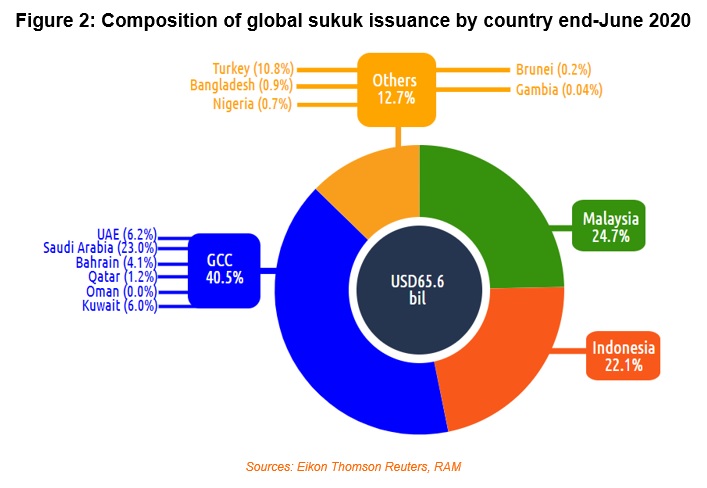 RAM Ratings’ Journey in The Rating of Sukuk