RAM Ratings has assigned a preliminary rating of AAA/Stable to Amanat Lebuhraya Rakyat Berhad’s (ALR or the Issuer) proposed Senior Sukuk Programme of up to RM5.5 bil (2022/2044) (the Proposed Sukuk).

The preliminary rating reflects ALR’s superior ability to meet profit and principal obligations on a full and timely basis on the scheduled payment dates. From a credit perspective, we assessed the Issuer and the Concession Companies1 collectively as a single economic unit, analysing the transaction finance service coverage ratios (FSCRs)2 on a consolidated basis. The existing ratings of debts backed by the individually rated highways will be withdrawn upon their full redemption via proceeds from the Proposed Sukuk. 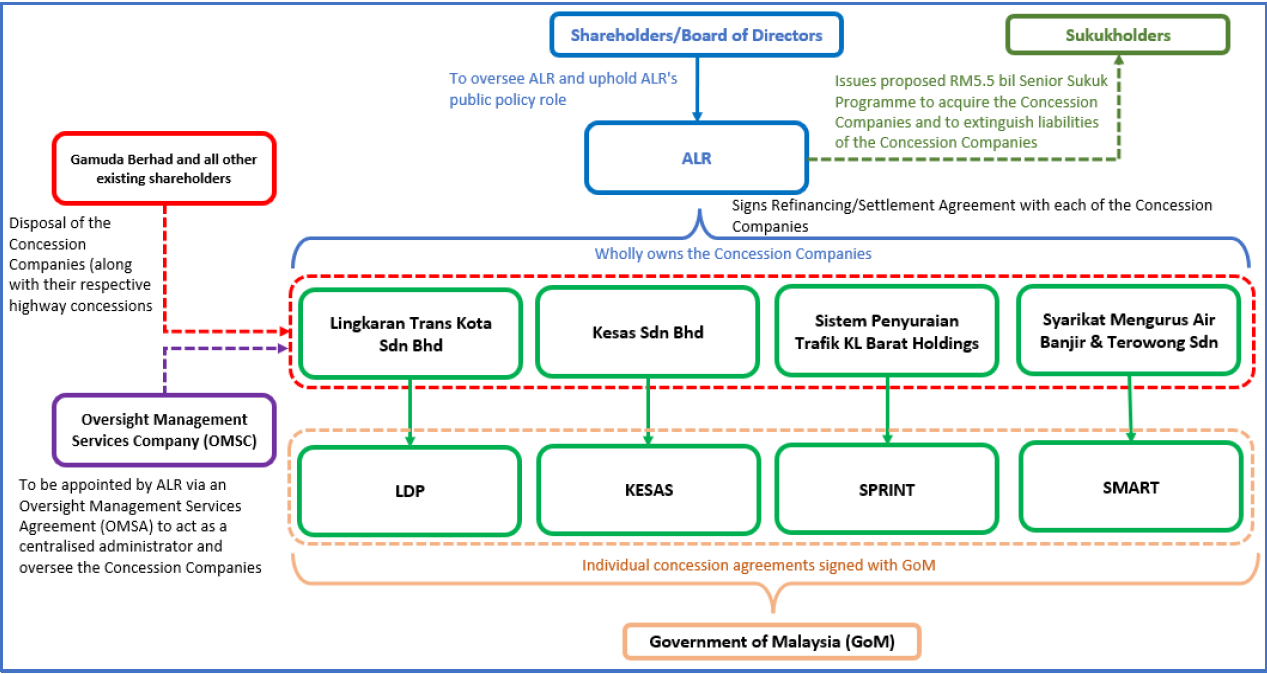 The preliminary rating considers our assessment of the historical and projected operational and financial performance of the respective four highways and concession companies, the Proposed Sukuk’s repayment terms including yields (and step-up profit rates) and maturity tenures, indicative structural terms and covenants, operational risk as well as the legal and regulatory framework for the highway sector. A prohibition against any other distributions apart from the Issuer and Concession Companies’ expenses and highway maintenance, which is capped annually, further enhance the Issuer’s liquidity and debt servicing ability. Any further indebtedness requires sukukholders’ approval.

The rating also considers key representations made by Gamuda Berhad (the primary shareholder of the four highways) and as reflected in the supplemental concession agreement (SCAs) effected at the end-April 2022 on the: (1) fully tax-exempt nature of ALR and the Concession Companies; (2) freeze on toll rates until the Proposed Sukuk is fully repaid; (3) extension of the concession agreements; and (4) the Cabinet of Malaysia’s formal approval of the acquisition.

While ALR was incorporated under the Companies Act, its shareholders are not profit motivated. Comprehensive governance best practices are included in ALR’s mandate and charter to avoid moral hazard risk associated with the shareholders who will not earn any return on equity. From its official website, ALR has a public policy role to fulfil in (1) ensuring urban mobility and prioritising motorists’ safety; (2) enabling the government to achieve its aim to eliminate compensation payments entirely while maintaining the affordability of the highways; (3) accelerating nominal or zero tolling by maximising cost efficiency and (4) ultimately returning the concessions of the four highways to the government as soon as practicable upon full redemption of ALR’s financial debts. To achieve these purposes, the Board Early Redemption Incentive Scheme (BERIS) is put in place to incentivise ALR’s board of directors to redeem the Proposed Sukuk as early as possible while still maintaining the required highway standards for motorists.

Notwithstanding the deferred BERIS of ALR’s shareholders/directors until the Proposed Sukuk has been fully redeemed, sukukholders can remove any director by special resolution at any time. ALR is obligated to prepare and report its traffic performance, financial performance, availability of funds and the Proposed Sukuk’s early redemption status to the Government of Malaysia annually. For good governance, ALR will be doing the update on a semi-annual basis.

ALR’s Proposed Sukuk would be the first highway sector Sustainable and Responsible Investment (SRI) Sukuk in the domestic market.3 While more complex due to the presence of multiple stakeholders, the transaction is balanced by earnings diversity, the maturity of the four highways and the catchment from a larger network of highways. The indefinite freeze on the highways’ toll rates is credit positive from a traffic demand risk perspective as rate hikes increase traffic volatility, making forecasting traffic patterns difficult.

The traffic volume on the four highways was relatively stable before the COVID-19 outbreak but was affected by ensuing movement restrictions. The combined average daily traffic (ADT) in 2020 (715,986 vehicles) fell 26% from the pre-pandemic level (965,885 vehicles). Given the importance and strategic alignments of the thoroughfares, traffic recovery has been resilient of most of the highways. The full opening of economic sectors and borders augur well for traffic recovery, but we remain concerned over potential development of new COVID-19 variants which might derail the highways’ recovery trajectory. Considering the prevalence of remote work arrangements and new travel patterns, we expect traffic performance to gradually recover to pre-pandemic levels in early 2023 for the key highways in the portfolio.

In terms of contribution, LDP is expected to account for 47% of the transaction’s revenue during the Proposed Sukuk’s tenure, while KESAS, SPRINT and SMART will constitute a respective 23%, 26% and 4%.

Based on our sensitised projections, the annual cashflow of the four highways and cash accretion are anticipated to support ALR’s steady debt servicing ability, translating into respective minimum and average FSCRs of 2.25 times and 4.50 times (with cash balances) throughout the tenure of the Proposed Sukuk (base case: 2.41 times and 5.65 times). These levels are supportive of the coverage ratios required for an AAA-rated transaction.

With no other distributions beyond transaction expenses and sukuk obligations, the Issuer’s cash accumulation capacity is high. To address the negative carry risk, ALR may buyback outstanding sukuk from the market on a willing buyer-seller basis at any time or exercise the available call options allowing partial or full early redemption (after the first callable date). If it performs to the Issuer’s expectations, the Proposed Sukuk will be fully cash backed by May 2033, against RAM’s expectation of May 2035 under the sensitised projection, assuming ALR does not partially prepay the Sukuk before the first call date. While the financial close is targeted to be on 24 June 2022, the cash flow analysis and numbers for this preliminary rating is based on assumed issuance in end-May 2022. This will be updated in our final rating exercise.

The transaction also provides for future highway acquisition(s) and refinancing of the Proposed Sukuk. Any future highway takeovers are subject to sukukholders’ approval and would be supported by further issuance under the Proposed Sukuk programme. This is made possible if there are any buybacks or exercising of call options to redeem any outstanding sukuk partially or fully before the end of the Proposed Sukuk tenure. Conversely, if a full redemption does not occur on any callable date, ALR has the option to refinance the remaining outstanding sukuk, although this would require the government’s approval.

ALR remains exposed to regulatory and political risks as well as policy uncertainties which we deem to be high for the highway sector. That said, Cabinet approval of this financing exercise indicates that the government may be more serious in its intent to resolve outstanding issues relating to highway compensation and toll-rate revisions.  Risk of termination and expropriation due to non-performance of the concession terms is deemed low given the established track record of the Four Highways, while force majeure risk is remote given the transaction’s well diversified portfolio of highways.

ALR was set up on 13 December 2021 after the Cabinet gave the greenlight to restructure the highways. The former’s shareholders will come forth as a group of experienced and distinguished corporate individuals to achieve ALR’s mandate. The Proposed Sukuk will be issued to mainly acquire 100% equity interest in the Concession Companies, to refinance all their outstanding debts and set aside opening cash reserves as liquidity support for the transaction.